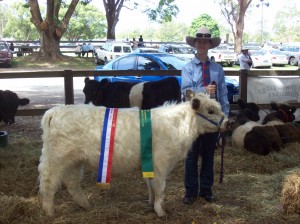 One of our award winning stud Galloway Heifers

Slynfolde Galloway Stud was formed in the early 1990’s at Murray’s Run in the Hunter Valley of  NSW.  The main herd is now situated at Mullumbimby, on the Far North Coast of NSW.   Another herd is located at Binalong near Yass.  We are well situated to supply cattle to most areas of NSW.